Martian Fluxx -- a Creepy version of the game! 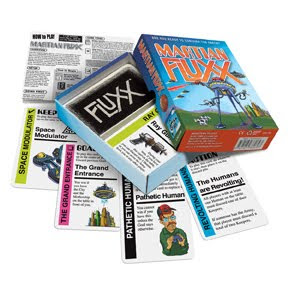 I'm a serious fan of wargames and simulations, but I also have a definite weakness for silly multiplayer card games and there are few sillier, but great multiplayer, games than the Fluxx series of games from Looney Labs.


The fundamental structure for all versions of Fluxx is extremely simple. You deal out three cards to each player and they start laying by following the Basic Rules: Draw a card and then play a card (following the instructions on that card, if any).


The key cards in Fluxx are New Rules, marked in yellow, that change or add to the Basic Rules. They may change how many cards, you draw or play introduce new rules such as a limit on how many cards you can have in your hand. New rules take effect immediately, so if you play a Play 3 card as your first play you can now play 2 more cards from your hand. These might include Action cards, marked in blue, which allow you to perform the action listed on the card such as draw more cards or trade hands with an opponent.


At the start of the game you don't even know what you have to do to win. You find out when someone plays a Goal card, marked in red, which might say that whoever had 10 cards in their hand wins. Most, however, center on having certain Keepers, marked in green, the fourth type of card in the game, played on the table in front of you.

Zombie Fluxx introduced a new type of card called the Creeper, marked in black, which is basically an anti-keeper. If you have a Creeper in play in front of you you can't win, even if you otherwise meet the conditions of the Goal currently in play. Unlike most other cards, if you have a Creeper you must put it in play instantly in front of you. It's not all bad news, though, because occasionally a Goal may actually require a certain Creeper to win. The Creeper idea has been popular and shown up in every version of Fluxx published since Zombie Fluxx came out and was even retrofitted back to the basic Fluxx game when its 4th Edition came out, so it can be considered a core element of the game

Martian Fluxx brings the role of the Creepers to a whole new level. In previous versions Creepers were pretty uncommon -- just four cards in Fluxx and seven cards in Monty Python Fluxx, for example. But Martian Fluxx has 14 Creepers, most of which are Pathetic Humans. Yes, in Martian Fluxx the players are the Martians, out to invade the earth with flying saucers, ray guns, mother ships and abduction chambers, with just the Pathetic Humans, their Army and the Germs standing in the way. There's even a small chance the humans will win. One of the cards is an Anti-Goal card called Retreat and if its stiff conditions are met the Invasion is called off the Martians retreat in defeat!

It's all good fun and demonstrates the flexibility of the Fluxx game engine, which seems adaptable to any theme so long as there's some silliness involved.

Like all versions of Fluxx the game is very easy to teach (although so chaotic that some folks will need a game or two to wrap their minds around it), very quick (half an hour or less), and very scalable (the box says up to 6, but I've managed 7 OK). It's one of the very few games that someone can join in-progress (just deal them 3 cards and they are in).

While all Fluxx-series games have the same art on the back, and could theoretically be mixed together, the trend with the latest themed versions has been to discourage that. Martian Fluxx explicitly says that the theme of Martian invasion doesn't fit in well with the other themes, and shouldn't be mixed with other decks.

I haven't played every version of Fluxx (others are Eco-Fluxx and Zombie Fluxx), but every version I've played has been a hoot, so it's highly recommended.

Some random games I own

Seth Owen
Norwich, Connecticut, United States
I've been a gamer since 1969, a military officer since 1979 and a journalist since 1988.